You are here: Home / Archives for Don Kiely

Don Kiely, founding member of FAHC, will again be doing a presentation about hiking the Chilkoot Trail at Beaver Sports on Thursday, 2/24/2022, at 5:30pm. If you’ve ever thought about hiking this iconic trail that is soaked in Klondike Gold Rush history, now’s your chance to learn more about it. Including how to navigate the planning and permitting processes. 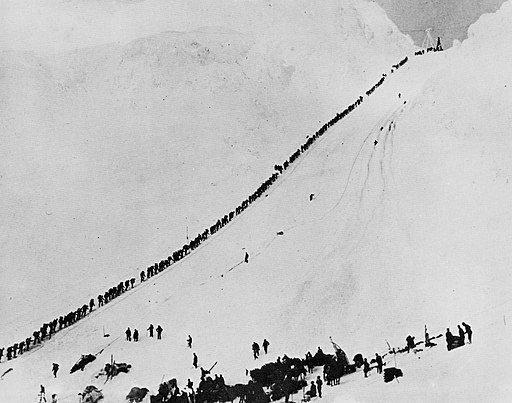 The Board of Game is going to meet on November 18th and will consider several topics concerning the 40 mile caribou herd/hunt. Of note, they will vote on whether or not to accept Agenda Change Requests at this meeting, which ask the Board to review proposals outside of their regular cycle. You can find the meeting announcement here.

I have submitted an Agenda Change Request, which proposes to expand Fish and Game’s ability to utilize the targeted hunt option for the entire fall and winter registration hunts and would, I hope, ensure that the hunt continues to be sustainable and also reduce hunter congestion/chaos.

END_OF_DOCUMENT_TOKEN_TO_BE_REPLACED

With the impending disembodiment of Yahoo! Groups, FAHC has moved our email list to Groups.io. If you were on the old list, you should have received an invitation to the new one. But if you want to join, go to the FAHC email list page, and you can sign up there.

We were eight people and two dogs. We met at the Pedro Monument and then carpooled to Skoogy Gulch.

We were looking for Bob Pettit’s rock that he climbed in 1968 but couldn’t remember its location was. Because he mentioned water coming out of the hill from a pipe and there is a water pipe at Skoogy Gulch, it seemed a likely prospect.

Jim Deininger knew the area and we hiked on a good mining road to a caved-in drift mine (hard rock). We then continued hiking up the hill along the power line with a good view of the hill on each side. Since it was early in the year, the visibility through the trees was good. We saw an old caterpillar and an old truck in Sgoogie Gulch and mining equipment including a trailer (to haul stuff with) upside down off the trail but no rock.

The trail ended at the True North Mine Road where we admired the views, but no Bob’s rock. True North did a good job of reclamation. Jim explained why the mining stopped. The gold in that area is in the shist and far too expensive to get the gold out. We passed the road going up to Pedro Dome but didn’t hike up since I knew where weren’t any rocks (tors) up there.

We then hiked back and stopped at Silver Gulch. It was a nice afternoon, not a very long hike and although it was not a success finding Bob’s rock, we saw another bit of the Fox area. 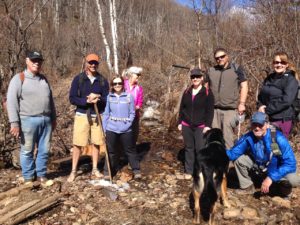