Access: Take Steese Highway north. Go straight at Fox to get on the Elliot (turning right keeps you on the Steese). Turn left just after Livengood to stay on the Elliot (going straight puts you on the Dalton Highway). Parking area is at Milepost 93 Elliot Highway, on the south side of the road.

Trail or route conditions, wildlife sightings and any highlights from the trip: The trip started COLD! About 12 below at the exposed parking area with winds of about 30 mph. Things got better after that. On the way in the winds were steady and fairly strong (about 15-20 mph) up high and in some low places. The 10.1-mile trail was drifted several places. Brush also encroaches in some areas, but the trail is mostly in good shape. A good clothing system was needed, especially face protection from the wind, but otherwise it was great. Views were splendid. Sunrises and sunsets (not too far apart these days) were outstanding. Not much in the way of wildlife. A few ptarmigan and grouse, and a couple of moose at the springs.

Jay rode a fatbike and was the fastest. He did some pushing, but mostly rode. Jill and Beat hiked with sleds. I took my new kicksled—a human-powered dogsled. It didn’t deal well with the drifts–sinking in or tipping over–but it was awesome for riding on the downhills. Jay was fastest on the bike. Jill and Beat generally outpaced me, but since they don’t ride their sleds I caught and passed them on the long downhill to the hot springs. (No such luck for me on the way back with two long uphills and only one downhill.)

The area has three cabins and three hot tubs. We stayed at the Cedar Cabin. It and the rectangular hot tub were in great shape. The winds died down, making a trip out to the hot tub more enjoyable. While in the tub we saw several meteors, including a spectacular one that lasted several seconds. They must have been the last of the Ursid meteor shower, which was supposed to have peaked a few days before. The cabin is well equipped with electric lights, powered by a wind generator, and a propane oven. We enjoyed pizza at night and cinnamon rolls in the morning.

The trip out was pleasant. Temperatures between 5 and 20 below, but not much in the way of wind.

For more information see the Tolovana Hot Springs Web site. To Jill Homer’s post of this same trip, see her blog: Return to the magical land of Tolovana. 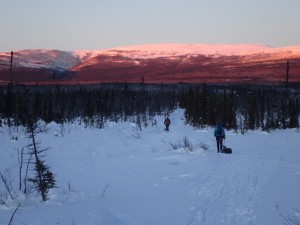 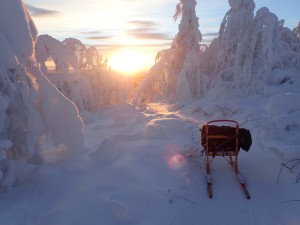 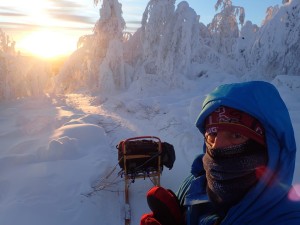 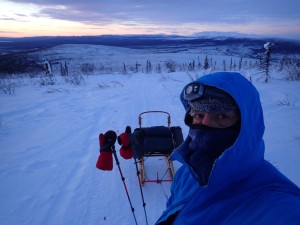