In early November 2015 we did a fun overnight snowshoe trip into the White Mountains. Christine Nutter-Huff organized the trip, which happened to come directly after a foot of fresh snow blanketed the pristine wilderness. Myself, Jay, Keri, Kim, Sarah, and Stanley started from MP 23.5 Elliott Highway with packs and snowshoes, taking turns pulling the firewood sled. Over nighters were joined at the beginning by a day-hiking couple Adam and Inna.

Enjoying blissfully balmy fall weather, we plodded up the gradual five-mile hill while packing down the fresh snow. Kathy Cannone took her fatbike in for a day ride from the Wickersham Dome trailhead just a few miles up the road, while Iris Hartshorn skied in a little later from Wick, joining us at the cabin later. Saturday snow flurries gave way to overcast skies with no wind. Sunday dawned bright and clear to the southeast making for classic winter pictures.

The weekend was perfect with teamwork on the trail, teamwork on the deck cutting firewood and chopping kindling, evening social time with storytelling and charades in the heat of the cabin.

Some people stayed in the cabin and some stayed in tents. Stanley was very entertaining with his lively trail conversation and energetic acrobatics in the tight space of the cabin. For those who have never tried cabin trips, I highly recommend it! Lee’s cabin has an axe and a bowsaw, and about a mile away you can find dead standing spruce. But I recommend bringing your own saw or several saws, the one at cabin is dull. It does take some energy to gather the firewood. It was quite a sight when Sarah was out there up to her thighs in powder grabbing dead bent-over spruce poles, then pulling back and hanging like a monkey till it breaks, dropping her to fall buried in the powder, coming up laughing.

The hike out on Sunday was only about three hours since we were going downhill on packed trail. It was an invigorating and delightful stroll full of chatting, highlighted by Jay and Keri sledding on the steep part close to the road. On the drive back to town, we topped off the awesome weekend with breakfast at Hilltop Truck stop, arguably the best to be found anywhere.

Favorite quote from weekend? Two hikers are tugging the firewood sled: “nice teamwork guys!” Says a third, “that’s right! Teamwork on the trail, that is why Fairbanks Hiking Club rules!” 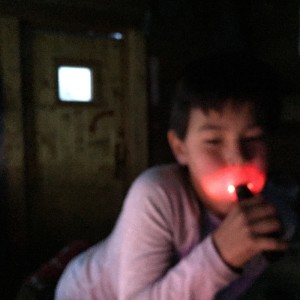 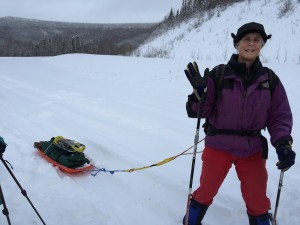 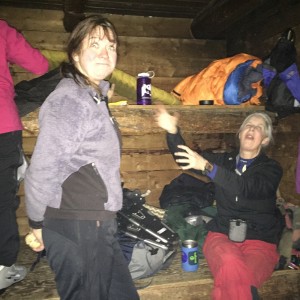 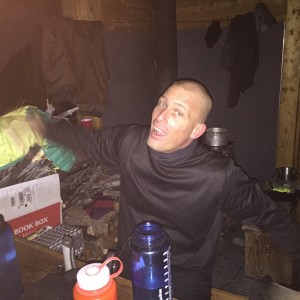 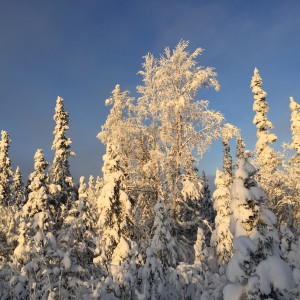 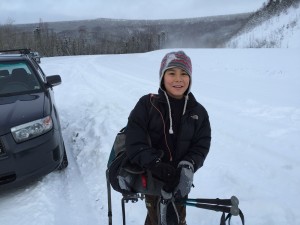 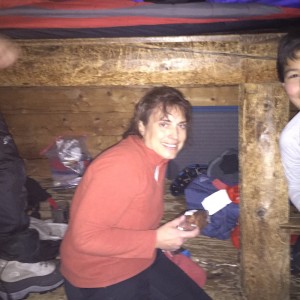 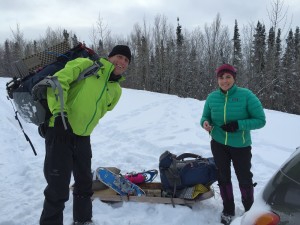